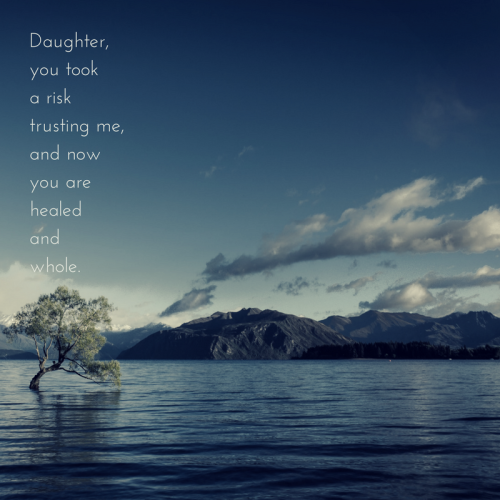 No one sees me slip through the crowd. I am good at being unseen; it has been the key to my survival.

For twelve years I spent everything I had, poured every ounce of hope into healing. I paid and I prayed, losing every last thing. And still I bled. For twelve years I have been weak, cursed, exiled from my neighbors, unclean.

I had heard of this Jesus, rumors of His power, the miracles that seem to fall from the sky around Him, like manna. If I could get close enough to touch Him, certainly a brush of His robe would be enough. I had heard the blind gained their sight and the lame could walk again with just a word from this Jesus invoking the power of Heaven.

I am almost close enough to touch Him. I can hear the voices of His closest, most faithful followers, men and women who dropped everything to remain at His side. He can’t possibly be a fraud, not with this many people surging around Him.

Jarius, the local religious leader, has pushed through the crowd, pushed in front of me. I shrink away, take up smaller space. From where I crouch, I hear the grief and desperation in his voice, rising above the many circling Jesus, and there is something deeply familiar in his heartbreak it cracks me in two. I stay close to the ground, my head down, bent half in pain, half with the intense need to remain unseen. If I am seen I will be cast away, shouted down because of my illness; my uncleanliness demands it.

I hear Jarius speaking of his sick daughter, his plea twisting in the air, his brokenness so different from mine yet so intimately known. Jesus has turned His attention away from the crowd, standing still and focused on Jarius as he pleads for his daughter’s life. I will not interrupt; the Healer has much more important work to do.

But then Jarius leads Jesus away, toward his home, and a new well of anguish bubbles up and over. Quickly, feverishly, I crawl closer, and Jesus pauses in mid-step as if waiting for something. Quickly, feverishly, I reach out for the hem of His robe, stained, caked with the dirt of His travels. The fabric is rough in my hands, and for barely a breath, I hold on.

It is immediate. I know. It is a memory of the Galilean sea rushing over me, this healing that throws me, flattens me, overcomes me. A heartbeat and I want to shout my gratitude, but no, I cannot. I have stolen something divine and powerful, so I slip away, just as unnoticed but irrevocably altered.

His voice carries over the crowd. They quiet. He asks again. I am almost to the edge of the sea of bodies, almost free to disappear. They point out the size of the crowd, the absurdity of His question, but there it hangs unanswered, tethering me back. Because I fear God more than my own body, I turn back; I cannot help the trembling in my bones. Jesus has been watching me, as if He knew all along who indeed had dared.

The people part a path back to Jesus, and I drop to the ground at His feet, weighted down by what I have done, what I have claimed. I confess it all to this God-Man and to the crowd. I am on my knees before Him, my face hidden in the sand, in a deep shame that shivers and shakes over me. My neighbors, fellow villagers who have for years now skirted around me, ignored me, cast their eyes away from me – I feel their stares openly now as my confession tumbles out, darkening the dirt at His feet.

I cannot look up from the pit of my despair. I do not hear Him so much as feel Him in every cell of my body, in my very marrow, answering a longing so buried I had not recognized it before.

“Daughter,” He says to me, His touch – His own this time, not a stolen brush against the threads of His robe – burning that word, that identity into my soul. “Your faith has made you healed and whole.” He has lifted His voice for the whole crowd to hear. My faith, He tells them, has healed me.

The extravagance of Jesus is staggering. He has given me wholeness, yes, a way forward in holy healing.

But more than that, intimately more than that, He has called out my shame, my illness and my suffering, and has transformed it into something worthy, a story redeemed and redefined. I owe Him everything. Faith in this Jesus is easy; the lightness in my gut tells me I’ve been waiting my whole life to follow Him.

This season of Lent, I am pulling out some of the questions Jesus asked with the intent of digging into (some of) what he might want us to know. I want to tell these stories as if I had been there myself, as if I was the one staring dumbly at Jesus on a crowding lakeshore when he asked, “Who touched me?” found in Luke 8:40-48.