The Abject Terror of Raising a Daughter: Guest Post by Knox McCoy

Have I got a treat for you. It’s not a free box of puppies, but it’s something you will equally enjoy, except with your eyes. Shoot, now I want to go pet some puppies. 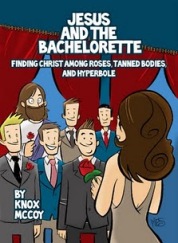 The treat I’m talking about is this guest post right here by blogger Knox McCoy, recently published author of Jesus and The Bachelorette (a book you need to buy if you want your marriage to work and/or land that dream job and/or live to be 100 and/or none of the above but are you willing to take that chance?), and possible future unwitting co-creator of FaithTV’s version of The Bachelor/ette. Trust me, I really feel like Christians are ready for that jelly. It’s gonna be HUGE.

Knox is funny. Laugh-out-loud funny. I read excerpts of his blog to my husband, who chuckles heartily. I quote Knox’s one-liners to friends who don’t read his blog and don’t really know who he is (their loss), despite my feeling awkward for prefacing one line with a paragraph-long introduction, as in, “I read this guy’s blog who writes weekly recaps making fun of The Bachelor/ette and this is what he said about the Yankees:” and they laugh too. I wish I were that funny.

I’m letting him take over to promote his book, and you can taste test his witty words (and then assume I’m witty by association), buy his book, be enlightened, and cure that eczema problem that’s been flaring up. In that order. You’re welcome.

You guys, in less than a month, my wife will be giving birth to a baby girl. On a scale from 1 to 10, I’d rate my mental preparedness to be somewhere around Britney Spears when she shaved her head and Christina Aguilera’s Dirty phase.

I have all these swirling emotions about the little girl that’s about to come into my life. Some are very similar to the ones I felt for my son. These emotions are very powerful and may or may not be the cause of some tears shed during overly sentimental commercials.

But some emotions are completely foreign. Like abject fear and terror. I’m scared to death that I’m going to be a dumpster-fire of a father to her. But even if I somehow manage to be the Bill Cosby of dads, there’s a layering of fear that she could STILL end up in a strip club somewhere in rural Tennessee, with a stage name of Delicious Destiny or something. Terrifying, right?

Emotionally speaking, I was kind of a wreck before my son was born. Having a family has always been one of my big desires in life and this was because I had such a good childhood. I wanted to replicate this for myself and I didn’t realize just how moving my son’s birth would be in those terms.

But even still, I didn’t wrestle with the same things then I’m wrestling with now.

This time around the concerns are different. I feel more validated as a parent because, well, my son is alive and I mean that counts for something, right?

But more pointedly, right or wrong, having a daughter seems more complicated. For one, I’m a guy and my interests are football, meat, velociraptors, and zombie movies. I could be wrong, but I feel like these things won’t naturally mesh with her female sensibilities.

But beyond that, raising a daughter seems trickier because our culture seems flooded with elements to complicate her life. While I do agree that there are just as many troubling elements of our society for boys, I’ve been there so I can navigate them better. Issues like Jacob vs. Edward? I haven’t been there so it’s going to be a lot more uncertain for me to parent a child through.

Besides Jacob vs. Edward, here are some other things that have me worried about raising my daughter…

The Role Model Thing
Have you seen some of the people considered role models? Just look at the people featured on magazines. Not exactly Ruth and Esther-types.

Frankly speaking, there is either a dearth of female options with role models or the atmosphere is so clouded by the bad ones that we can’t make out the good ones. Either way, when an entire subculture of women are popular simply for being popular, it’s fair to say that there’s a problem with how we assign value to celebrities.

At this point, the only worthy heroines I’ll be able to point to for my daughter are those from Pixar movies.

The Societal Expectations Thing
I feel like though society as a whole is getting more and more superficial, it’s also expanding to allow more leeway on the whole barbie doll archetype thing. This is a good thing, but still with girls, I feel like the margin for error is razor thin.

I have no reference point on this because my entire first semester of college was spent wearing the same pair of Adidas flip-flops to class every day and playing Grand Theft Auto.

But essentially the point remains: you can deviate from the traditional female ideal, but only if you are still fundamentally attractive within whatever enclave you inhabit. Nerdy, sporty, all the Spice Girl categories really, are all fine, but you still must be physical appealing. Otherwise, you might as well be Rosie O’Donnell.

The Friends Thing
Girls and their relationships seem about as simple as decoding Martian hieroglyphics. I have a few close guy friends and if we get mad at each other we yell or fight and then it’s over.

With girls? They could have a fight one day and eleven years later, they’re both still secretly hoping that the other one gets really, really fat or ends up on Hoarders. It’s insane. I feel like female friendships have the flexibility of an IED.

The Future Husband Thing
To know that in all likelihood, at some point in my life, I’m going to have to eyeball some punk kid who’s going to ask me permission for my daughter’s hand in marriage? That’s enough to humble a man.

I remember myself at 22 when I asked my wife’s parents for permission to marry her and you know what? It doesn’t exactly give me the warm and fuzzies.

Current debates on gender roles aside, the hope is that she will find a man to love her, lead her and guide her. But my thing is, if I’m doubting my own abilities to properly do those things, how am I supposed to trust some dumb kid with those jobs?

I wonder if in some ways, marrying your daughter off is like communism: a decent idea in theory but when it comes time for you, there’s NO way you’re happy about it.

What things did I miss when it comes to raising a daughter?

You can buy Knox’s new book, Jesus and The Bachelorette here. It’s also available here through Amazon for your Kindle. You should also visit his website, subscribe to his blog, follow him on Twitter and pray for his wife.

Hey! Down here! Here’s your chance to make me feel more popular than I actually am! Oh, and get something for free. It’s a win-win. In the comments: What are you afraid of? I won’t laugh at you, unless it’s something ridiculous, like puppies. One random commenter will win a FREE copy of Knox’s ebook! And if you already have it, then I give you permission to pay it forward and re-gift it. Just not in ugly wrapping paper. Here, I’ll go first: I’m afraid the 18-wheeler driving in front of me on the Interstate is actually on the verge of exploding Matrix-style. Laugh factor: Negative 104,365,324.

You have one week. GO!

41 responses to “The Abject Terror of Raising a Daughter: Guest Post by Knox McCoy”