Of Time and Magic 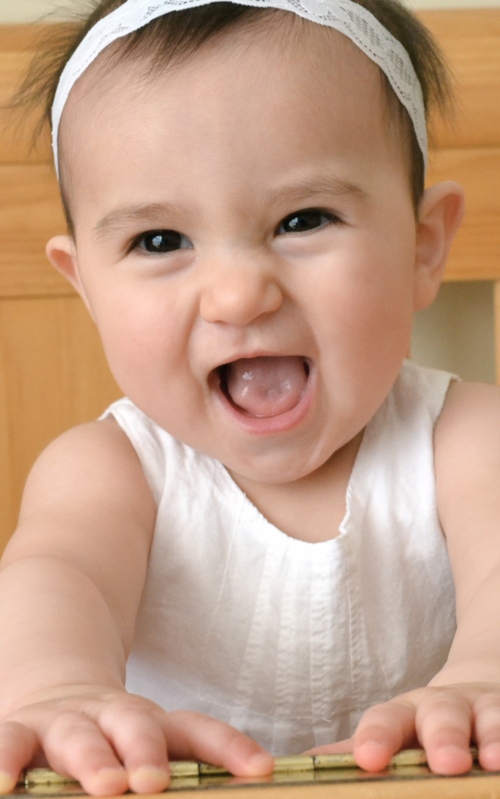 Ten months. Why does that seem so much more than a mere thirty days’ time from nine months?

Maybe because she’s saying something new everyday, more than the constant, “dadadada,” and on to more dignified speech, like, “mama.”

Maybe because she speed-crawls around the house, getting where she needs to go without my help, shrieking with a delightful sense of accomplishment the entire way.

Maybe because there is no such thing as a stranger, and the couple sitting next to us at Panera, just short of completely smitten with her, is more fascinating than the oatmeal I’m trying to maneuver into her mouth.

Maybe because the dresses and outfits her tiny body hasn’t outgrown yet because she’s smaller than 80% of babies her age fool me with their 3-, 6-, and 9-month tags.

Maybe because I look down at her from baking a batch of banana bread and she looks minuscule playing at my feet, and I daydream about when she’ll be old enough to want to help before I can catch myself from wishing her older.

Maybe because I find myself brainstorming cake and party themes, trying to remember one-year-old diet restrictions, hunting down the Baby’s First Cake recipe I have that won’t overload the sugar, instead of holding her against my chest, her fuzzy head tickling my chin.

Maybe because Bean misses me after her morning nap, grinning at my arrival like I’m someone famous, and I know it’s only a matter of time before she becomes a full-fledged Daddy’s girl.

Maybe because I have completely forgotten what it feels like to not have seventeen pounds balanced on my hip while I do other chores, or how tender my scalp used to be before miniature fingers had discovered, yanked, pulled, and tasted my hair, or how much more efficient it is to eat meals with two hands instead of one hand devoted to shoveling mashed-up fruits and veggies in a constantly-moving, squealing mouth, feeling something like the windmill hole at putt-putt, or how easy it was to run a mile in under ten minutes but how hard it was to do a pull-up, my middle slowing me down but my arm-strength something to be admired after constantly curling the weight of a growing baby.

Maybe because ten months can’t possibly suggest the amount of time I have known this magical little baby girl while being this much in love with her, this far obsessed with her, this desperately and wholly captivated.

11 responses to “Of Time and Magic”