Two years ago, Bug was diagnosed with epilepsy. Since then, he has been on a mild anticonvulsant to calm those little bursts of brilliance down. Since he hasn’t had an episode in that time, his neurologist Dr. K. ordered a routine EEG to see how he has responded internally to the medication.

After staying up until midnight, waking up at 4am, and eating nothing but popsicles (much to Bug’s delight), Hubs took our little Bug to the lab for his EEG. After taking a test that basically sleep- and grub-deprives you, then flashes strobe lights at your face in order to provoke an epileptic episode, the results were in: everything was normal.

Can I get an “Amen!” from the gentleman in the back?

So the next step is to slowly wean Bug off his medication over the next five weeks or so. By mid-March he will be drug-free.

Except – and this is where Hubs and I stopped breathing, and don’t plan on releasing that breath until, say, 2015 – up to 40% of children have a relapse within the first two years of being off their medication. (I seriously considered homeschooling at this point, despite my complete and utter inability to teach.)

But then again, only 1% of the American population will have even developed epilepsy by the age of twenty.

So in other words, it’s sort of common to outgrow a highly uncommon diagnosis. This is a statistician’s (and a parent’s) nightmare. 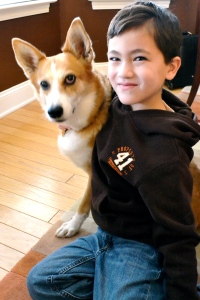 One has (had?) epilepsy, the other just has a wonky eye.

We are, however, cautiously excited about what this means for Bug, as we slowly phase out of a routine that has been our daily companion for the past two years, as we watch and wait and wonder if It will strike again, and hold our breaths every time he moves out of sight and into the care of another, possibly less-diligent, probably less-involved adult, as we try to refrain from going overboard and banning monkey bars, slides, the second floor of our house, sleepovers, swim lessons, and all other things that could prove disastrous if It were to strike then and there, as I try (probably unsuccessfully, I’ll let you know) to refrain from becoming Hover-Mom, as I stare at his new prescription for Diastat, fully intimidated by its mere existence in my home, never you mind the thirty-page pamphlet outlining how and when to use it exactly, as I try, try, try my darnedest, most likely on an hourly basis, to entrust to God’s sovereignty the well-being of my most prized possession…

It’s overwhelming, and nerve-wracking, and all-consuming, if (or rather, when) I dwell on it long enough to let it be, and I’m pretty sure I won’t be getting a fully refreshing breath of air, the kind that makes you feel like your lungs just settled back into place, at least not for the next 2-5 years, until that 40% statistic vanishes from our timeline and we can place Bug squarely in the 60% one.