You have some mighty big shoes to fill. Last year was chock-full of all kinds of awesome, so I hope you’re planning on bringing your A-game.

Just to refresh your memory, and simultaneously challenge you to step it up a notch, let’s go over 2010 briefly. 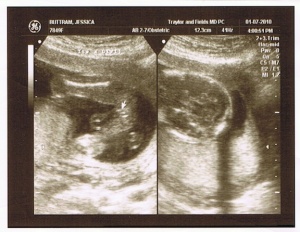 I'm Sorry, Nurse, But I'm Sure You're Mistaken.

This time last year, I was almost half-way through my pregnancy with Bean. We found out she was a girl, much to my surprise and Hubs’ anxiety. Although, you get a pass on this one, 2011 – I absolutely have no intentions of growing another baby anytime this year. But don’t get too comfortable. I still expect you to somehow top “Have a Baby” – winners don’t compromise.

Hubs and I also celebrated six years of marriage last February, so this February, you’ve already got a one-up on 2010 by boasting seven years of marriage. (And only getting sweeter.) What else do you have in store for February? Actually, don’t answer that…surprise me.

Last March I rejoiced in the return of one Jennifer Knapp by attending her comeback tour. That’s going to be a tough one to out-do, 2011. I don’t have any other most-favoritest-musician-EVAR-who-have-dropped-off-the-radar, at least not that I can think of. I also found out my sister was getting ready to give me something I’ve never had before: a niece. I don’t really expect any new nieces or nephews this year, either, so you’re going to have to come up with something original.

April was mostly spent waiting on Bean and Spring sports for Bug – nothing too spectacular to note. There’s your chance, 2011, to pull out in front. Don’t waste it. I’m giving you a pretty big head start. Ball’s in your court. 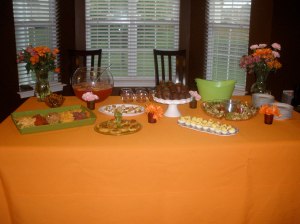 The Baby Shower Spread. No pictures of me, because I decided to wear yellow while 9 months pregnant. I looked like the sun, and not in a good way, but in a very large and round way.

Between my birthday, finding out my brother was also expecting (a boy this time, 2010 really knew how to mix things up), Bug successfully completing his Kindergarten year, becoming unemployed (on purpose), and rounding out the final month of Bean-growing with a baby shower and chocolate-covered strawberries, needless to say, you’ve got your work cut out for you come May.

I’m pretty sure there’s nothing you can do to top June. I know my sweet Bean is going to celebrate her first birthday, courtesy of you, but her birth was nothing short of amazing. June 5, 2010, was a collision of perfect timing, unbearable pain, quiet ecstasy, and an explosion of the heart, mine, Hubs’, and Bug’s. All I can say is, good luck, 2011.

Bug turned six last July, and this year he’ll be seven. Unacceptable, 2011. He should not be that old. He’s supposed to be three, but I blink, and he’s going on thirty. Ridiculous, I say. Last summer was pretty fun-filled, thanks to summer camp and a slew of grandparental visits, and a Bounce House birthday party, so I expect nothing less from your summer months.

August and September were a couple of good school months, as far as school goes. We ended the summer celebrating my sister’s impending labor and delivery down in my hometown, Bug started off his first grade year, older, wiser, smarter, and in excellent form, and I started (and ended, har, har) an exercise regimen. If you show me to be in better shape at any point during your tenure, 2011, then well done. That will certainly put you a length ahead. Maybe.

October is going to be another tough one to beat. I don’t mean to keep discouraging you, 2011, but I wasn’t kidding when I said you had to bring your A-Game. October welcomed two new babies in my family, the aforementioned niece and nephew. Both beautiful, celebrated, long-anticipated, and so squishy, I couldn’t keep my hands off them, even if you chopped them off. (That’s a gross metaphor…sorry about that.) On top of that, Auburn started to emerge as a force to be reckoned with. Granted, you get to claim the National Championship game on Monday (and consequently, Auburn’s first National Championship Title in over 50 years, ahem, War Eagle, ahem), but you’re going to have to do some work if you’re going to convince Cam Newton, part quarterback, part fighter jet, to stick around for your 2011-2012 season, instead of going pro. Let’s see what you can pull off, eh, 2011? 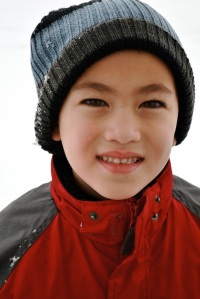 November, beautiful, busy, and a great start to the holiday season. Thanksgiving, my kid sister becoming a bar-certified attorney (unremarkable, actually, because it was only to be expected), and preparing for the end of another year…too busy, even, to have blogged much about it. You’re probably going to have to go balls-to-the-wall next holiday season, I’m just sayin’.

Rounding out the year, December was another beautifully busy month, with Bean’s first Christmas, unforgettable family time, top-notch gifts (one less top-notch than others, in my ears’ opinion), and snow, snow, snow. Not to mention Hubs turning thirty, giving me full, unobstructed access to Old Jokes. For approximately 2.5 years until I also cross the three-decade threshold, that is. But more about his thirtieth later.