There Ain’t No Stoppin’ Us Now

Merry Christmas and all that jazz. A little belated, and the heady stuff came last year, and, p.s., it SNOWED! (I like to mix things up a bit, keep you on your toes.)

Hubs came through like The Ryan Express (that will be the only – I repeat, only – baseball reference ever to grace this blog) and got me this sweet contraption for Christmas. Why, yes, that is a Nikon D3100. Why do you ask? I would have taken a picture of it with my new toy, but, well, even M.C. Escher couldn’t swing that.

And in response to Hubs’ totally rad Christmas gift to me, I got him a slightly less rad but equally thoughtful present. (If I had known he was going to go balls-to-the-wall on my behalf, I would have stepped up my game.) Alas, he had to settle for an engraved iPod Touch (engraved with lyrics from the song we played at our wedding. Wha-BAM!) preloaded with Angry Birds and a handful of songs I knew he loved. And the real present was that I actually resisted playing Angry Birds before he had a chance to open his gift, resulting in virgin territory. Ahh, a gamer’s dream.

And now. Let the fun begin. Prepare, dear reader(s), to have a visual aid with Every. Single. Paragraph. From here on out. And because I only deliver empty promises to my children (hyuk hyuk), behold the power of the Nikon, a set of mini-drums, and staggering beauty that will make you catch your breath and possibly weep. If you’re a total nancy. (Just kidding.) 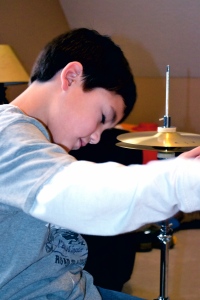 Bug’s Christmas list to Santa was a whopping four-and-a-half things (the half was an afterthought), all of which he received, except for the half (he asked for a puppy, the little snot). He got the extra-cool things from Hubs and me (Epic Mickey and a skateboard) and the kinda-lame thing from Santa (Kung Zhu pets…honestly, who sat around and thought, you know what animal would make a deadly ninja? HAMSTERS! WIN!) and the pièce de résistance, a fully functional (Fully. Functional.) three-piece drum set, courtesy of my baby sister, who is still childless.

Behold, my little ball of noise (read: he who needs no help) jamming out to his numero uno Christmas present. Earplugs not included.

It must be nice to get everything on your Christmas list. I’ve been asking for a horse since I was three, and I have yet to get one that is black with a white mark on her nose so I could name her “Star.” Just kidding. Horses frighten me, because they are large. 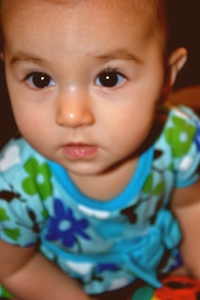 And then there is this gorgeous gal, whose Christmas list was basically anything she could put in her mouth. We obliged, because how can anyone say no to that face? (Just to clarify, I’m pretty sure you are staring at the most beautiful baby on the planet.)

And so, Bean’s first Christmas was one to be remembered (not by her, though, obviously), with chew toys galore, a personal rock concert in-between naps, and snow on the ground to boot.

At this point, I plan to hibernate until April, now that the only reason I put up with cold weather is over.