I can’t believe almost five months have passed since I first saw this: 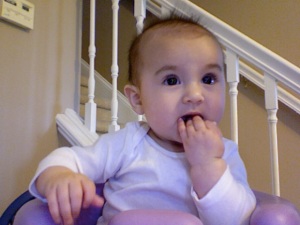 It’s unfair, you know, that she has been living outside my belly for only a little over half as long as she has lived inside, that I have food in my pantry older than her, that five months is not nearly long enough to master an instrument, or earn a degree, or even deserve a raise at your current job, and yet it is perfectly long enough to be severely in love with my little girl, to watch my son grow into being her best friend, and to be terribly upset with Time because my baby should not be five months old yet.

And now, during the days of this next month as she approaches the (gulp) half-year mark, an entire explosion of growing up is ready to happen, between cutting her first teeth, and sampling solids for the first time, and I am not prepared.

She fits into a whole new category now. I can’t really call her an infant or a newborn anymore, and be right. She’s still a baby, but a very mobile one, one who is finding her place in this world, and making herself known. She is no longer the quiet observer, wide-eyed and awestruck by absolutely everything she sees, smells, and hears. She has discovered her voice, and she will try to outdo you with her sounds and volume. She can control her arms, so much so that she will attempt to imitate your movements, if you do them closely and slowly enough. She has a laugh, a toxic laugh that can make you willingly act a fool in the middle of a crowded store, just to hear it over and over again.

I hear her babble, or watch her smile, or feel her nuzzle her little face against my shoulder, and I am suddenly okay with waking up every couple of hours in the middle of the night, or with holding perfectly still for a solid sixty minutes because she has fallen asleep across my lap, or with taking split-second showers because she woke up crying the second I lathered up my hair, or with having to work twice as hard and eat half as recklessly than ever before because maternity jeans are only flattering on pregnant women.

It’s overwhelming, actually, knowing that I spend every waking moment with her (and many half-awake moments) and it’s still not enough time, because just twenty minutes ago I was experiencing all of this for the first time for my firstborn who is now six and impossible to slow down.

It’s a beautiful dilemma to have, to be honest, to be so violently in love with a couple of tiny people that I sometimes can’t see straight, knowing that it won’t be too long before they are no longer tiny, and at the same time getting front row seats to the most excellent adventure.