“Panties is a Vile Word.”

So I’ve read a few books lately and have wanted to review them, but kind of felt like it was out of place. Then decided, oh, well.

First up, Francine Rivers’ Redeeming Love. I actually had a bunch of girlfriends tell me about this book and urge me to read it, and I finally got around to it. I was a little wary of Christian fiction – nothing against the genre, but sometimes it gets a little…hokey for me (that’s the best I can describe it) – but I decided to take a chance, and purchased this one via my Kindle and got a-crackin’.

I’m in love with Michael Hosea. That is all.

Rivers basically retold the book of Hosea, if it took place in California during the gold rush. In the Bible, God tells one of His faithful, Hosea, to marry a prostitute, Gomer (that was just the beginning of this lady’s problems). So he marries her, offers her a better life, and she runs off to nurse her errant ways. Over and over again. Hosea continues to draw her back into a faithful, clean life, a beautiful allegory of the constantly redemptive love of God.

Then, I read Naomi Novik’s His Majesty’s Dragon basically because it was a free download on my Kindle. Can’t beat that. You could consider it historical fiction, if history included dragons and their aviators (soldiers who fly them) as another branch of military during the Napoleonic wars. I loved it, and was more than a little pleased to see that this one is just the first of a whole series. I originally thought it was written some few decades ago, because of the style of writing, but found it published in 2007, and the latest one is currently available to pre-order. (But not for free. Bah.) 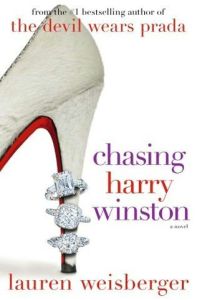 Lastly, Bug and I took a trip to the library the other day to replenish his (my) reading supply, and I picked up Lauren Weisberger’s Chasing Harry Winston. Hey, they can’t all be works of literary genius! As much as I love Picoult, Vonnegut, Kingsolver, and others who author books with meat on them, nothing says Summer Reading like chick lit.

It was exactly the kind of vacancy I needed to get lost in, what with the sleep deprivation, unbecoming hours, squeezing in a five-minute shower when I can sneak away or Bean is sleeping in Grams’ arms, and basically being stuck in an armchair with a newborn at my chest every 2-4 hours 8 times a day. And I should mention the chapter titles are a kick (hence, the borrowed title above).

Don’t worry, I will redeem myself with the other two I borrowed from the library, aforementioned Picoult’s Handle with Care and Kingsolver’s Prodigal Summer. Happy reading!