I promise to try to blog regularly. And by regularly, I mean not once every six months.

Apparently, our neighborhood is The Place to go trick-or-treating. I bought six jumbo bags of candy…and ran out. And my awesome kid (brag alert) decided to give some of his bounty so as not to turn kids away empty-handed. Hubs & I didn’t even ask him to – he just started diving in by the fistful. So, apparently, I have the best kid in the universe. And that was 100% objective. (Research shows.)

Check out Bug’s “Power Ranger” expression. Friday started out with a Halloween party at Bug’s school. In attendance was Hannah Montana (the little girl in the middle, aptly named Hannah for real), Abby Cadabby (a Sesame Street fairy, or so I’m told), Spiderman, Batman, Iron Man, and a slew of other superheroes who took the day off to partake in some Pre-K Halloween festivities. Bug got to trick-or-treat around the offices at the church, and kid racked up. I’m talking full-size candy bars that people give away when they only expect twenty kids to show up. And toys, stickers, the whole loot. Pretty fancy!

After a little bit of pre-Halloween fun, we headed home, where we met Hubs. His boss actually sent him home early so he could participate with the trick-or-treating. This was actually the first time Hubs got to go with Bug, so that was pretty great. They hit up the  neighborhood while I stayed home and handed out candy. We had hordes of kids, and by “hordes,” I mean hordes. Parents were driving up and down the streets in pickup trucks and haul-along trailers full of kids. I mean, their sons, daughters, and their entire fifth-grade class. Practically, anyway.

We also saw some of Bug’s school friends and church friends that don’t live in the neighborhood, but live nearby out in the country, where the next house is five miles up the road. I’ll have to remember that for next year and plan on surplus! (The real reason to stock up on candy? Leftovers.) We also had some decorative touches (thanks, Mom) that were pretty impressive. We had a skeleton named Boy George that looked like our lawn landed on him and a witch that sang her version of “Girls (Ghouls) Just Wanna Have Fun.” So fun – I love having a neighborhood for this kind of thing!

One thing, parents: remind your kids to have manners, even on the spookiest day of the year. I noticed that bad manners bug the hell out of me, especially since my four-year-old remembered to say, “Trick-or-treat!” and “Happy Halloween!” and “Thank you!” every time without prompt. Loved the eight-year-olds who banged on the door, held their bags out, then turned away without a second thought, except that maybe I gave him a Kit-Kat when he really wanted that Reese’s. Seriously. Nothing kills the fun like bad manners.

I like this picture because it looks like Bug is saying, “What? Oh, no, he didn’t just wear the same costume as me!”

And then decides they’re friends again and on the same team. Go Power Rangers! Because, really, there is like, six of them, or something like that. And red does not equal blue. On a related note, tomorrow is Election Day! Don’t forget to vote! (If you haven’t already…) 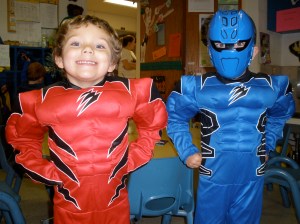 Until next time – which could very well be next summer…HOLLA!